This year I’ve been on a quest to spend more time enjoying the great outdoors with my 17-month-old son Avery.

We’ve danced around sunflower fields,  we’ve run through cornfields, and explored pumpkin patches all within the last 2 months. When I found out about the Apple orchids in the North Georgia Mountains I knew that we had to go.

If you’re in the Atlanta area, BJ Reece Orchards is the apple orchard that we actually went to. Be sure to look at their calendar and see what they have in season to determine which variety of apples you will be able to pick from. 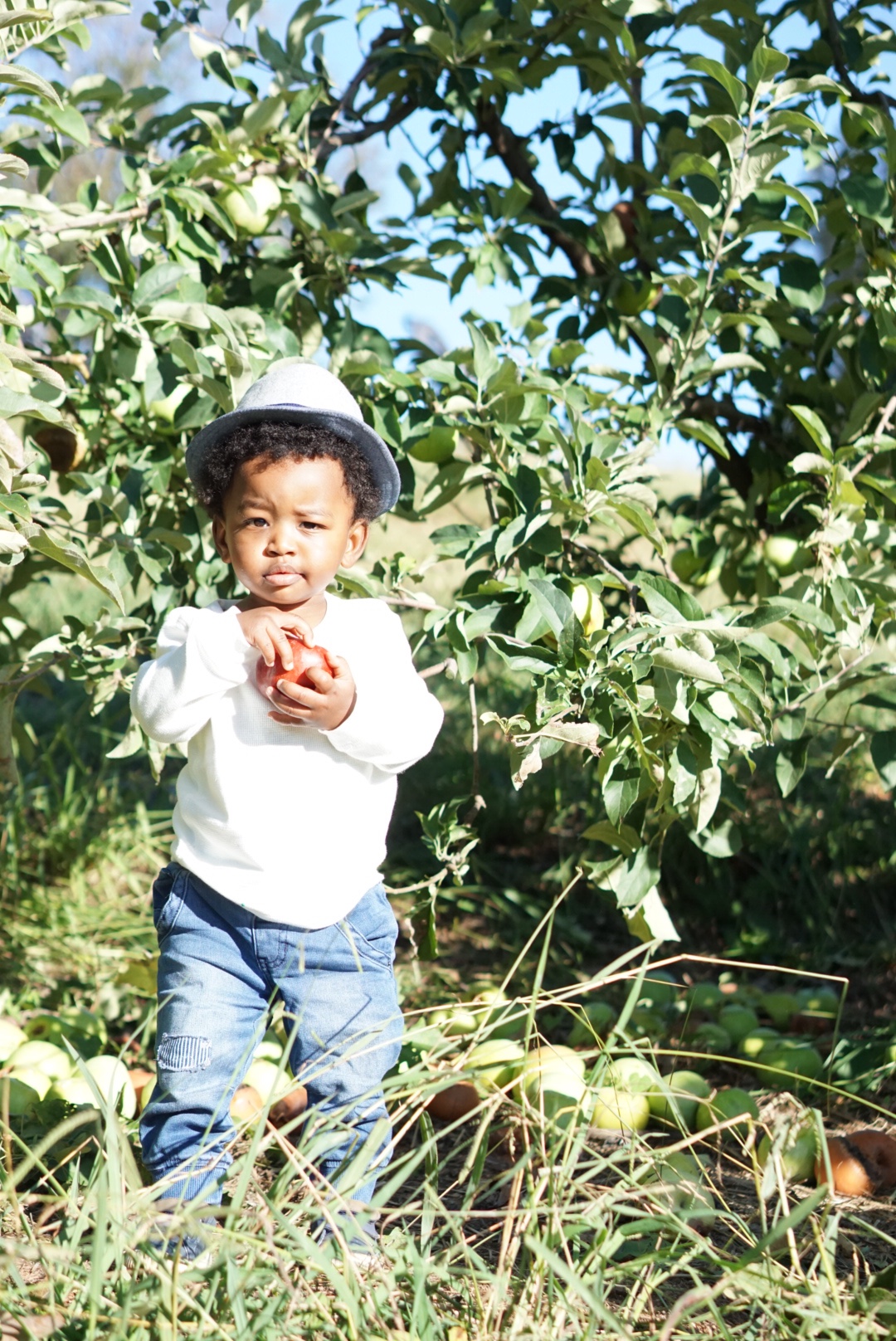 When we went apple picking there were many apples that were in season but the apple that I was most attracted to was the Granny Smith apple. It’s just always been my favorite apple to eat.

When we got to the apple orchard I quickly realized that the Granny Smith apples were not near the entry point to apple picking. Actually, they were kind of far away near the bottom of the hill.

But let me back up a little bit.

Our drive to the orchard was pretty far. As we got near, we passed many farmlands and even a vineyard. It was really cool to see grapes being grown on the vine. I wish I knew the name of this particular vineyard because they also were having a wine festival that you may want to check out. I’m sure if you just search for vineyards in area, you’ll find it.

Back to the Apple Orchard.

One thing that you need to know is that this apple orchard was really, really, really packed! But don’t fret, once you’re picking apples you hardly see anyone. That’s how big the orchard is.

There was a line of cars just to get up in there and it was kind of confusing as to where to even go.

On the left side of the road, there was a huge farmers market where you could buy things like apple gift baskets, ciders, dried apples, BBQ sauce, jams, preserves, mulling spices, salsa, syrups, butters, vinegars, hot sauces, marinades and more! There’s also lots of apple trees on that side and that’s one way that you can begin your apple picking.

They had lots of other activities such as the petting farm, scavenger hunt, apple cannon, zip lining, giant jumping pillow, cow train, and pony rides but I’m not sure the cost of those because we didn’t partake in any of those.

As soon as you pay your admission,  you have to buy a bag to put your picked apples in. The size of the bag is determined by how many apples you plan to pick. We chose the smallest ½ peck bag which was $7.00. I have a hard time consuming lots of fruit in a week and I don’t like for things to spoil so I just paid for the smallest bag.

At the orchard, there is a trolley that will take you around so that you can see all of the different varieties of apples at the orchard. Before getting on the trolley, I asked one of the staff members if the trolley would take me to the Granny Smith apples and she said that it wouldn’t and that they were on the other side of the orchard so we didn’t get on the trolley.

As you enter the orchard, you are at the top of a hill. The Granny Smith apples were close to the bottom of the hill. As we started making our way to the Granny Smith apples, this scent of Apple Cider vinegar hit me in the face pretty strong. I wasn’t expecting that at all.

The second thing that I wish somebody would’ve told me is that if you don’t like the smell of apple cider vinegar apple picking may not be for you.

I don’t want to come out and say it isn’t for you because maybe you can overcome it. If you really enjoy or think you may enjoy apple picking, it might be worth it for you the same as it was worth it for me. But the smell … oh my God the smell was so bad.

Think about it, there are thousands of people that are at these orchards right? And people are picking apples and dropping them on the ground. On top of that, you’ve got apples that are just naturally falling off the trees on their own to the ground. If you look any anyone’s pictures at an apple orchid, you will see them standing by an apple tree which has many apples that have fallen to the ground.

Looks cute right? But what you don’t know is that many of these apples on the ground are rotting or rotted. Why? Because I would imagine it’s hard for the staff to go in and pick up every single fallen apple daily. We’re talking hundreds of acres of land covered in apple trees.

The third thing that I wish I would’ve been aware of is all of the hills.

I don’t know if all apple orchards have so many hills but a good friend of mine went to a different apple orchard a couple of weeks after we went she confirmed that the one that she went to was a very hilly as well.

This is difficult for me to explain but there are mini hills on the side of a big hill and all of the apple trees are planted in rows on the side of a big hill. So if you can imagine a big mountain that you’re hiking up. Got that in your head yet? Okay, now imagine the letter m repeated over and over on the side of this mountain like this: mmmmmmmm. So there’s peaks and valleys, right? And at the top of each peak is where each apple tree is planted. They aren’t planted in the valleys but at the peaks. So you’re going up and down and up and down over and over walking through the apple orchards.

You can sit right under a tree but the tree is on a hill so if you have a small unstable child they could be constantly rolling or falling down the hill. Like mine was.

It’s not a stroller friendly, wagon friendly, wheelchair friendly or any of that because of all the peaks and valleys that are on the apple orchard.

I guess this must be the way that the apple trees have to be planted to grow fully. I’m not sure. I don’t know why they’re on hills like that.

If you do want to go apple picking be aware of the hills. Ladies now isn’t the time to wear your fancy high hills. I typically wear rainboots to just about all of these outdoor activities that I take Avery too. It’s just convenient for me because I don’t care if they have mud on them, they rinse off really easily, and they honestly kind of match everything that I’m wearing anyway.  They kind of look pretty good with everything so I’m always wearing rainboots.

Don’t get me wrong, the apple orchids were so beautiful. I felt like I was at a vineyard. Being one with all of the trees reminded me of one of my favorite memories at the vineyards in the Hamptons.

Oh one more thing! Because Avery was only 17 months old at the time, he really wanted to sit down a lot, crawl around, and pick up the apples from the ground.

So here’s a BONUS: another thing that I wish I would’ve thought of ws to bring Avery a change of clothes because he got some of those rotting apples on his jeans and hands. And of course, I couldn’t stand the smell on the ride home! Ahh! 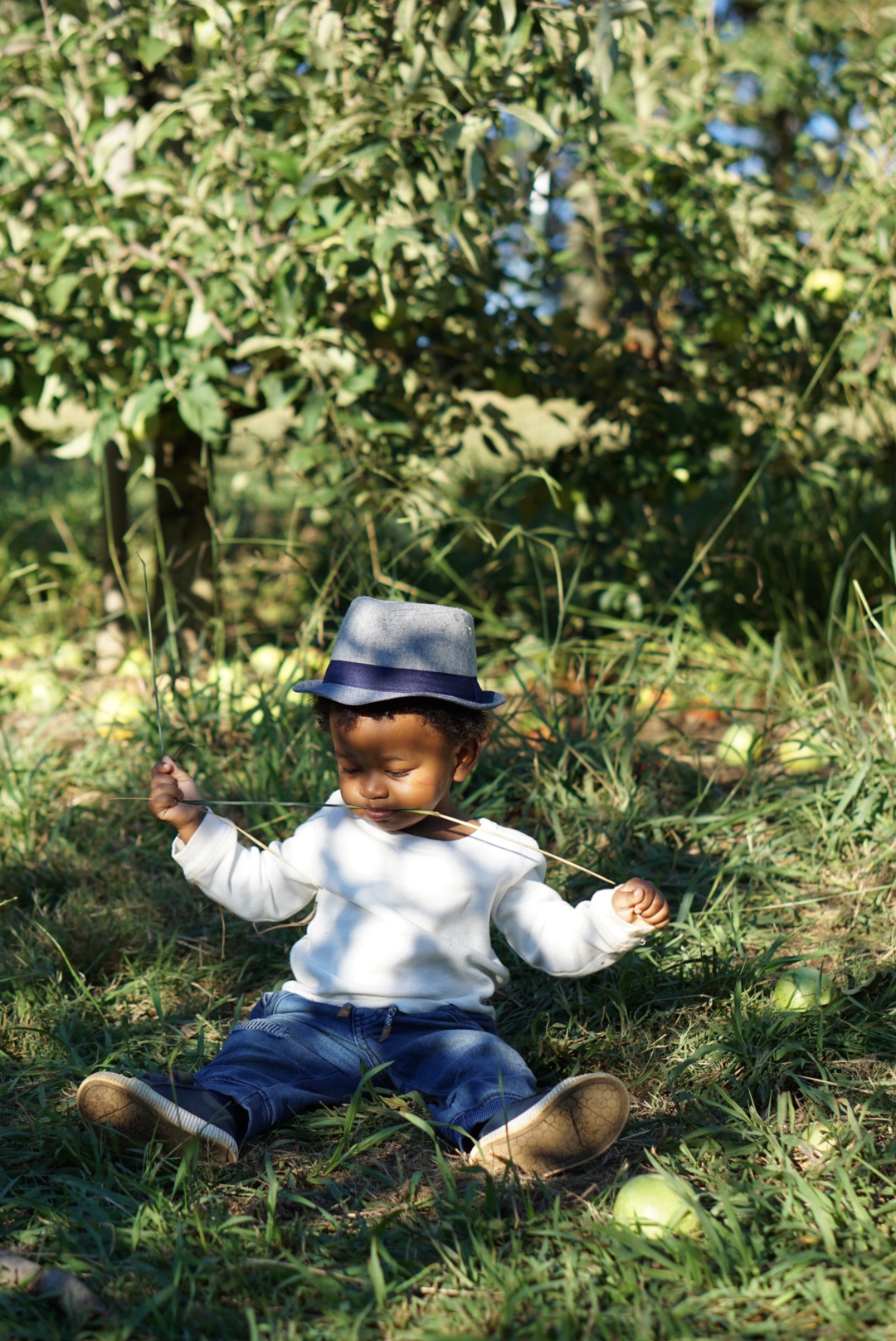 I did have lots and lots of baby wipes with me because I take his diaper bag with me everywhere that we go. I was able to wipe his hands from the rotten smashed up apples that were all over the ground by the apple trees.

Avery loves apples so he wanted to pick up the apple’s off of the ground and eat them. Even if they were not rotten and smashed there are signs everywhere that tell you not to eat the apples directly off the tree. You are supposed to wash them before you consume them. I would imagine that may be because they are sprayed in some sort of pesticide or something like that. The apple orhcards wouldn’t want to be liable so make sure that if you decide to go apple picking that you wash the apples before you eat them.

And that is everything that I wish I had known before going apple picking.

If you are excited about going apple picking or if you’re intrigued by this at all I think you should definitely go. Aside from the three things that I wish I had known, it was pretty fun. If your kids are older, I’m sure they would enjoy some of the activities there like the ziplining.

If you don’t have kids, that’s probably even better because apple picking could be a romantic date.

There were trees for days and I couldn’t even see the end. That’s how many trees there were. Also, everyone there has different tastes from you. Not everyone wants the Granny Smith apples that I wanted. Different people want different things and so you could be on a row of Granny Smith apple trees and only see about three other people. It’s crowded to get in the orchards but once you’re inside, it feels very private.

The farmers market, on the other hand, looked like a madhouse. We didn’t make it inside, but I saw hundreds of people swarming that place.

I hope this was helpful and I hope that you have lots of fun picking apples!

SHOP THE LOOK (will be added soon)